A Cappella Plus History-
​The Way We Were

In the 40 year history of A Cappella Plus, including the current our current membership there have been 94 singers- 26 Sopranos, 23 Altos, 25 Tenors and 20 Basses! We have had 3 directors. What an amazing reunion choir that would be!

Our history begins in 1980 with Phil Wallbank, a keen musician with a bag full of music of mostly madrigals. Phil was a member of the Malaspina Choir, and suggested to a few other interested Malalspina Choir members that they might want to sing some madrigals after the regular rehearsal. A few people took him up on his offer, and met to sight-read their way through a few songs. ​ 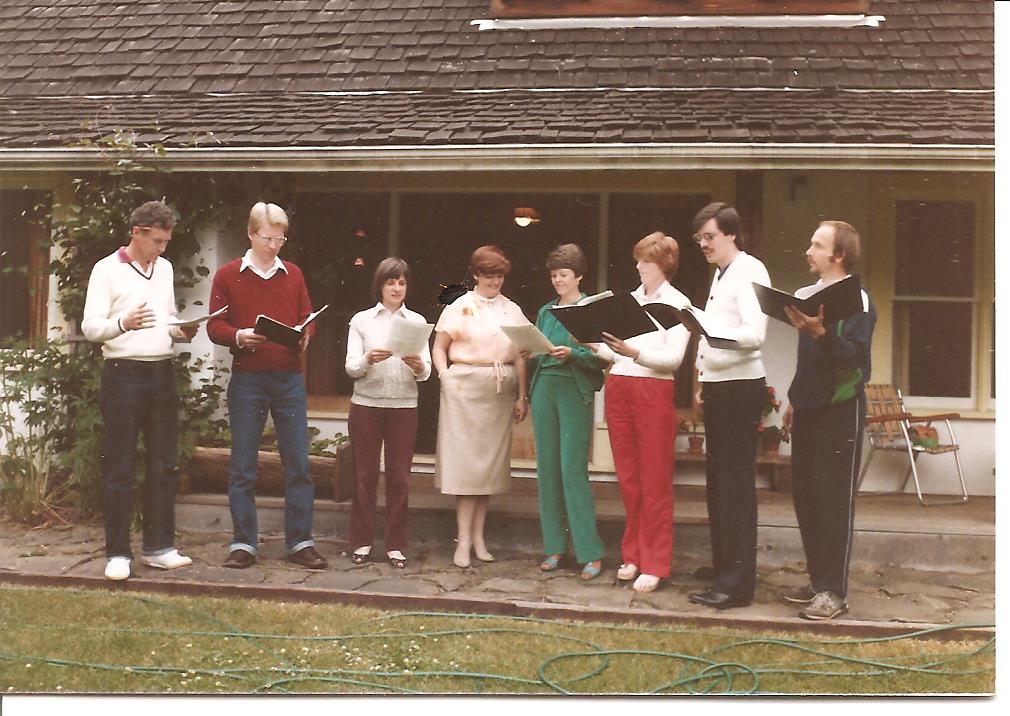 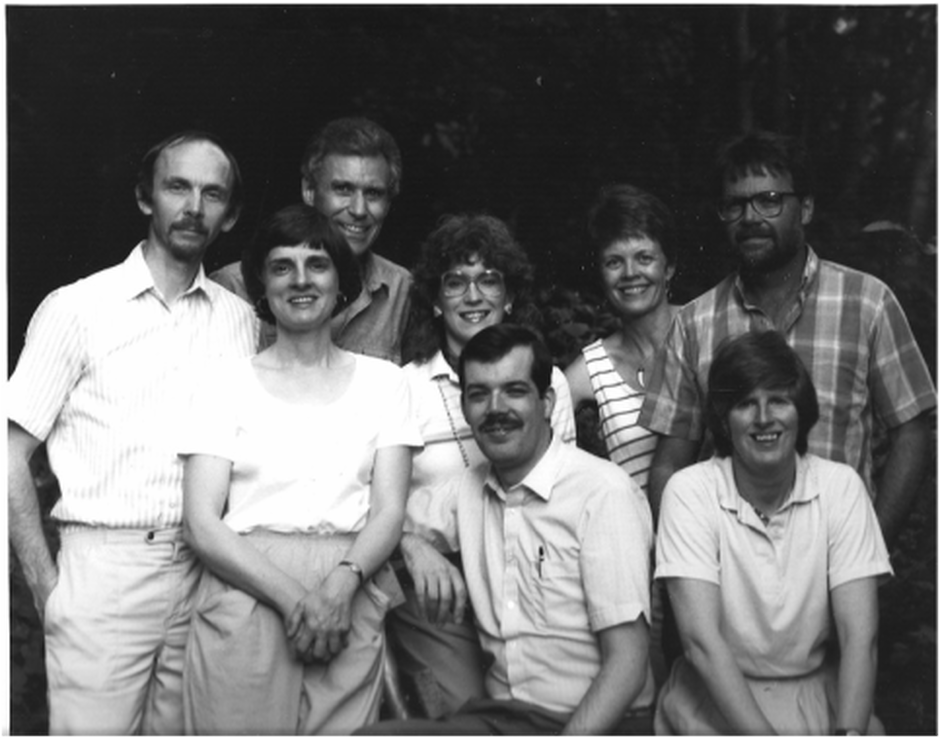 People came and went and eventually the same people started to come every week and we started to meet at members' houses. For several years we met after regular choir practice and sang madrigals and ballads. Eventually we left Malaspina Choir and started concentrating on the one choir. Our first concert took place in April 1983 in St Andrew’s Church, with Cantabile Chamber Choir from Malaspina College, and the Powell River Chorus. We called ourselves Nanaimo A Cappella Singers. During the eighties we remained eight singers and self directed. We sang mostly at  community events; Burns Suppers, Elderhostel, and the opening ceremony of Shakespeare Plus, the forerunner of Theatre One. We travelled to Powell River to perform with the Powell River Chorus, and joined other island choirs in Summer Songfest '86, held in Ucluelet, and Summer Spice performing arts Festival in Nanaimo. We sang in shopping malls at Christmas time, church services around Nanaimo and some weddings, including that of Dann and Carolyn Cox. 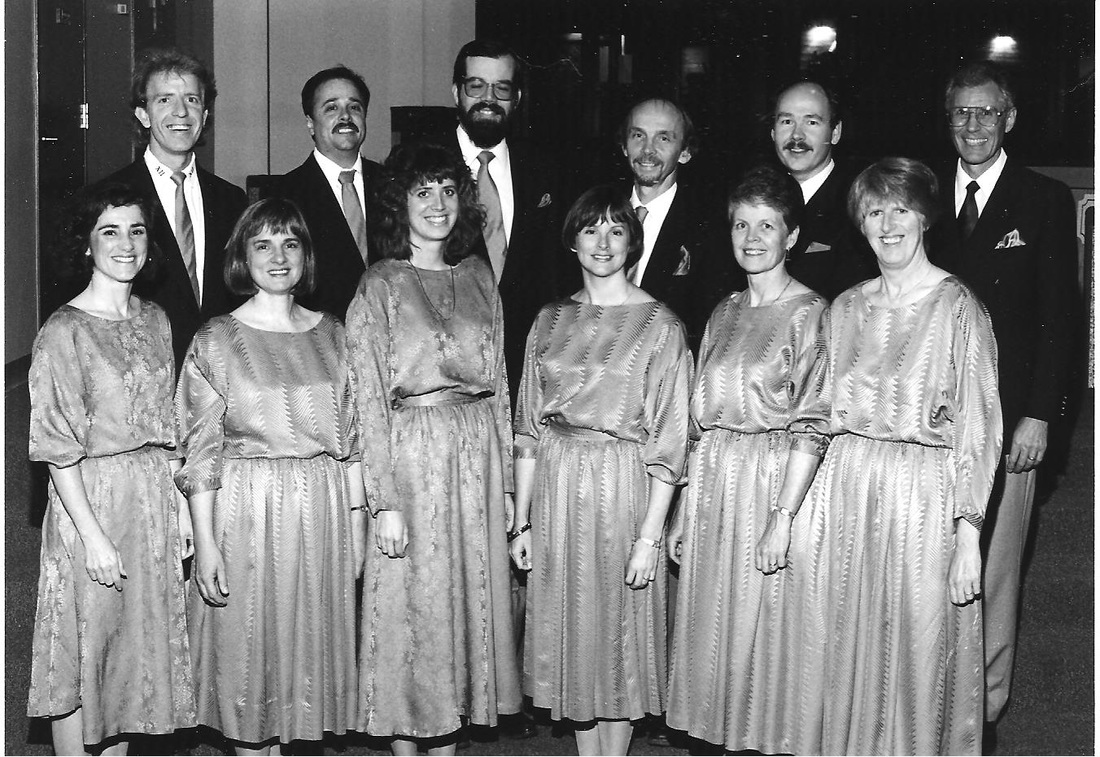 taken 1996
L-R Back row: Murray Harris, Pat Carpenter, Dann Cox,
James Duthie, Peter Hewitt, Bruce Farquharson
L-R Front Row: Janet Wright, Ann Smith, Sharon Sinclair,
Kathleen Lougheed-Mercier, ​Solveig Farquharson, Val Duthie
We started to put on our own concerts and invited young up and coming performers to join us, Pam Butchart and the Bastion Trio being some of the first.In the fall of 1990 the choir decided it would be a good idea to grow to twelve singers and have a choral director. Bruce Farquharson stepped out of the bass section and volunteered to take on the role.

As members came and went our repertoire was changing, and we began singing with accompaniment. We were no longer purely an a cappella choir, so in the spring of 1992 we changed our name to A Cappella Plus. By this time we were putting on two concerts a year as well as guest performances with other choirs and the usual community events. We also entered choral and jazz festivals, and the CBC choral competition. In September 1998 The Port Theatre opened and A Cappella Plus performed at the premiere concert! We had been contributing to the theatre society for several years and had purchased a seat in the theatre. Our 20th Anniversary concert was held in the Port Theatre in May 2000, and included many of our alumni singing with us in a group song.

​After thirteen years conducting A Cappella Plus, Bruce retired in May 2003. In June of that year we performed a Father's Day concert without a conductor and it went very well! At the end of June, we were asked to perform on The World, the luxury floating resort, which was docking in Nanaimo. It was too good an opportunity to pass up. The remuneration was good, so we asked Bruce and Solveig if they would rejoin A Cappella Plus for one last gig. They were as intrigued as we were so they agreed. 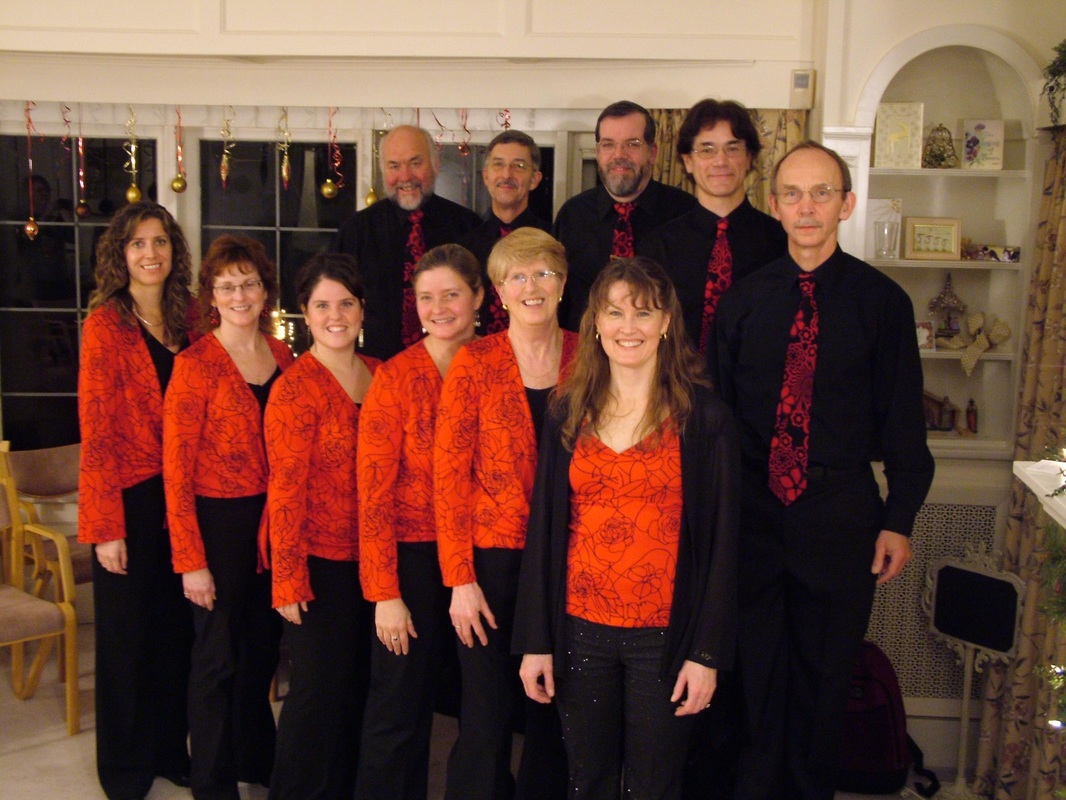 taken 2006
L-R Back row: David Moddle, Dan Hudson, Dann Cox, Rob  Sinclair, James Duthie
L-R front row: Sharon Sinclair, Kathleen Lougheed-Mercier, Tina Jones,
Kelly Townsend, Val Duthie, Rosemary Lindsay
In 2003 Rosemary Lindsay became our choral director. That fall we put on our own concert and also took part in a production of The Christmas Carol featuring dramatic reading with music. In January we had our first retreat at the Haven Resort and Conference Centre on Gabriola Island.  This enjoyable retreat became a tradition  for the next few winters.

In the spring of 2004 A Cappella Plus performed its first concert on Lasqueti Island. After a rough ferry crossing the next day, this was followed by an afternoon concert in St Anne's/St Edmund's Anglican Church in Parksville. Retreats became the norm and in the fall we met at the Bethlehem retreat on Westwood Lake. In the spring of 2005, we took our 25th Anniversary concerts to Victoria, Lasqueti, and the Port Theatre. In 2006 we released our first CD, As Time Goes By, having spent many hours in the recording studio under the Queen's Hotel in Nanaimo. By this time we were always doing two concerts per program, one in Nanaimo and the other in Parksville.

We took part in the Dancing Man festival on Gabriola Island in April 2007, followed by Voices of the Island on May 4th and were guests of the Vancouver Welsh Men's Choir in May. We took our first pure pop concert, Feeling Groovy, a blast from the past, to Nanaimo and Parksville in June, and Duncan and Lasqueti Island in September where we also had our retreat. This year as in the past year, we had to postpone concerts because of early snowfalls.

2008 was a busier year as usual. As well as our own concerts, we were guests of the Vancouver Welsh Men's Choir in Vancouver and of the Village Voices in Qualicum. We also sang in an evening of World Music with the Sinclair Singers and the Vancouver Island Gospel and world Music choir. In July we were participants and competitors in the International Choral Kathaumixw in Powell River. In September the Port Theatre celebrated its 10th Anniversary, and A Cappella Plus provided the chorus for the opening and closing numbers. We also took part in the first Nanaimo Sings! festival with many other Nanaimo Choirs in October.

After our retreat on Gabriola Island in 2009, we sang two romance themed concerts and a few more charity events. One of these was Open Minds, Open Windows at the Port Theatre. In October of 2009, we were part of the Olympic Torch Celebration as the Torch Relay came to Nanaimo on its cross- Canada tour before the Olympic Games in 2010.

In May 2010 we celebrated our 30th Anniversary Concert in the Port Theatre with the Sinclair Singers and the Nanaimo Youth Choir, and also released our second CD. Come Go With Me.
In May 2012 we shared concerts in Vancouver and Nanaimo with Jubilate, Larry Nickel's Vancouver choir.  We also took part in many charity events, and were guests for other choirs like the Soul Choir. 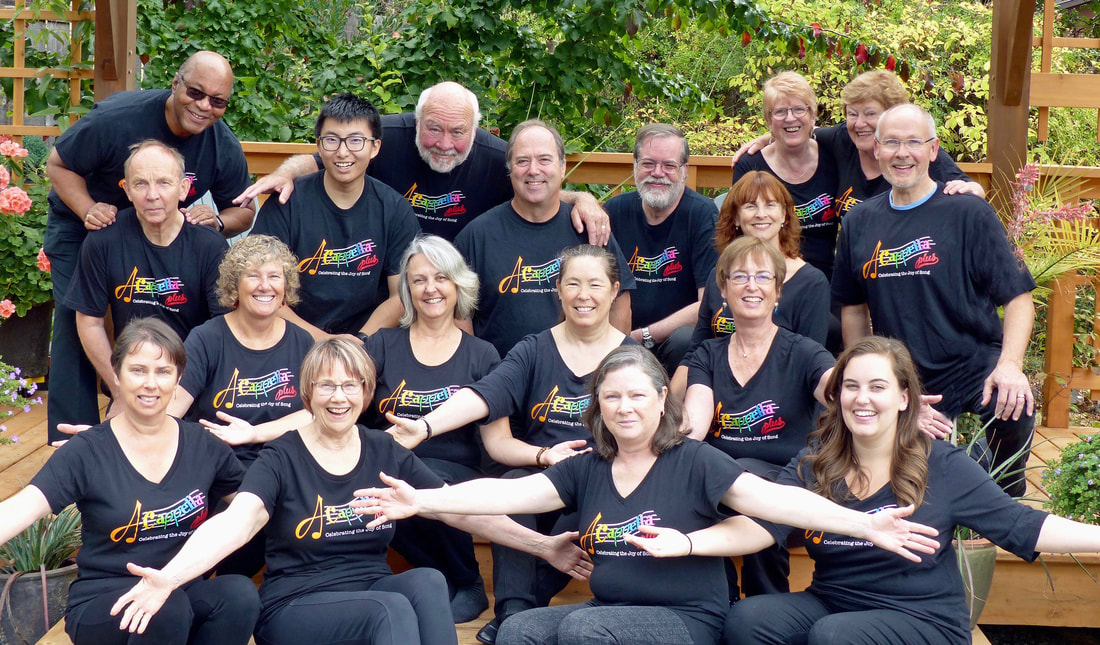 taken 2019
L-R back row: Ted Pierre, James Duthie, Tiger Zhao, David Moddle, Rick Robson, Dann Cox, Kathleen Loughheed-Mercier, Val Duthie, Linda, Dier, Peter Hewitt
L-R middle row: Nancy Twynam, Laura Cross, Patricia Plumley, Lonnie Moddle
L-R front row: Mila Skeeles, Heather Hoggarth, Lisa Desprez, Kari Cowan
In the fall of 2015, Rosemary went on to other things and Patricia Plumley became director. That fall we particpated in  Nanaimo Sings! Festival 2015, with 13 other Nanaimo Sings! choirs. We had our own concert  in November,  All Ye who Musik Love and sang Christmas songs and carols at Santa's Workshop in Downtown Nanaimo.
Since then we have put on concerts in the spring , fall and Christmas, and covered a great variety of repertoire. We began to perform concerts  in cabaret style, which became very popular with our audiences.

In November 2017 we performed a concert called A Cappella Plus and Friends at the Port Theatre. This concert featured our friends The Vancouver Men's Chorus, and the Vancouver Island Symphony Children's choir. A couple of the Men's Chorus pieces also featured very excellent choreography!

Some of A Cappella Plus joined other choirs on a choir tour to China in the spring of  2018, the rest of us were invited to audition at the casting agency for a choir in a Nyquil commercial! We really didn't know what to expect having never done this before, but we performed admirably. Heather and Ted got callbacks from the casting agency! It was a new experience and a fun day out! Meanwhile at the other side of the world, the rest of the choir were singing in a large bathroom in China!

In May 2019 we hosted Orpheus, a male choir from Vancouver. In December 2019 we took part in the Vancouver Island Symphony Concert, Mistletoe and Magic  with Patricia's other two choirs, Village Voices and VI Symphony Children's choir. We were guests of the Craig Bay singers in Knox United Church in Parksville.

In the summer of 2019 several members of A Cappella Plus sang with the Vancouver Island Choir, and were featured separately in choral festivals in Croatia and Scotland!

A tour was being planned to visit Spain in 2021, but plans for that and future A Cappella Plus  performances all went out of the window in 2020 when a very contagious virus, Covid 19, turned into a pandemic and started its rampage around the world. In March, the choir had stopped rehearsals, and all plans for future concerts put on hold.

Members of A Cappella Plus formed an octet to perform a series of concerts at Tigh-Na-Mara Resort in a gazebo overlooking the ocean in June 2020. We performed a couple of concerts but had to stop when the resort needed our Friday evening spot for weddings. Coming into the fall we did Zoom rehearsals with a couple of sessions on the Port Theatre stage where we could be singing masked and 6ft apart.